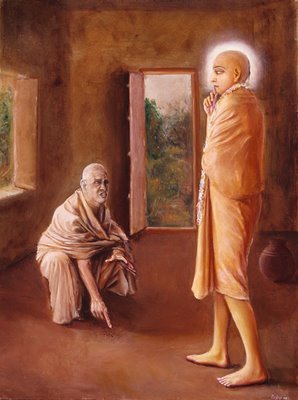 Ramachandra Puri chastising Lord Chaitanya seeing ants in His room. The Monk developed an envy of Sri Chaitanya Mahaprabhu after having had earlier committed an offense against his own Guru Madhavendra Puri.

[Bhakti Ananda Goswami’s Response to this article by Radhakrishnadas Brahmachari]

Thank You for this nice explanation of the difference between papa ‘sin’ and aparadha ‘offenses’.  When I first saw this article by Radhakrishnadas Brahmachari, I thought of writing something about the issue of papa and aparadha in the World’s other anciently related Bhakti Yoga Traditions.  However, since my Father and I have been struggling with a severe illness lately, I have not been able to do it.  So here I will only note a few things that perhaps I will be able to write more about in the future.

First, the concept of sin as papa and papa-purusha sin-personified or the person/man of sin, can be historically traced back to the enemy of  the Supreme Triune Godhead HERU-AUSU-ATUM of the Rhodian Cultus of Helios Meghistos Kouros / Krishna.  The first High Civilization of Egypt was based on the worship of the Theophanies and Incarnations of this Trinity of Hari (Krishna), Vasudeva (Balarama-Vishnu) and Their All-Pervasive Atman / Paramatma.  In North Egypt at Heliopolis the Hidden Lord of the Heart was called ATUM / ATON / ADON.  Later in the South at Thebes the same Hidden Lord of the Heart was called ATEN before and during the famous Amarna Period.
The Indo-Europeans and Semites also worshiped this same Godhead as HELI-OS-ATOMOS (Atman = Being, WHO IS and the SELF Ousios, Atomos, Ontos, Autos etc.). The Semites called this Godhead ELI-YAHU-ADONyahu.
For thousands of years the enemy of this Godhead was known as SETU /KETU (Satan the sinful cause of CATA-bolism decay disease and death) ) and PAPA / sin. The hieroglyph for PAPA / sin in Egypt was a small deadly poisonous centipede type of insect.  The meaning of the symbol is that the poison of sin can sicken and kill your whole body.  Thus a very small and insignificant looking creature or bite/sting may look harmless, but the wise person knows to avoid the risk of the deadly sting of such envious life-destroying sinful creatures.  Modern Egyptologists and Linguists have rendered this centipede-like ideogram for sin as PP and have transliterated it as APEP.  Obviously this name of the envious destroyer of life and enemy of God and Humanity is PAPA.