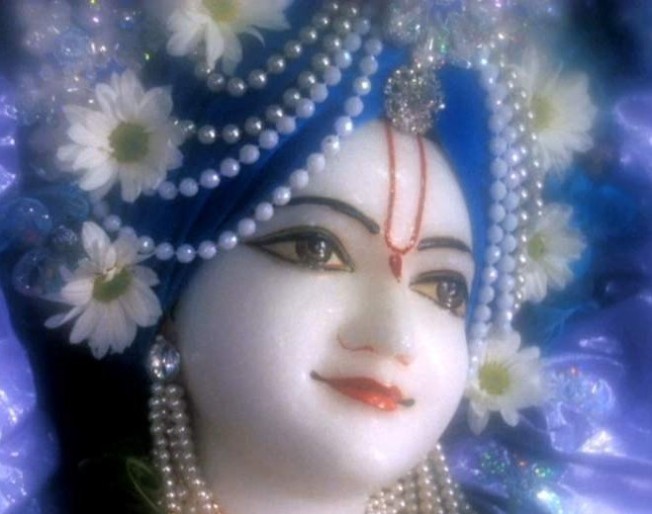 Prabhupad says that Maha-Visnu comes from Baladev/Balarama in TLC Introduction:

“[…]The manifestations of the Supreme are also explained in Caitanya-caritāmṛta. After offering respects to Lord Caitanya, Kṛṣṇadāsa Kavirāja next offers them to Nityānanda. He explains that Nityānanda is a manifestation of Saṅkarṣaṇa, who is the origin of the Mahā-Viṣṇu. Kṛṣṇa’s first manifestation is as Balarāma and then Saṅkarṣaṇa, and after Saṅkarṣaṇa He is manifest as Pradyumna. In this way so many expansions take place. Although there are many expansions, Lord Śrī Kṛṣṇa is the origin, as confirmed in Brahma-saṁhitā. […]”http://causelessmercy.com/?P=TLCIntoduction

Thankyou Bhakta Peter for this Quote. Although Lord Balarama was originally worshiped by all of Humanity, with the onset of Kali Yuga (Age = Yuga) proper information and realization of His Self Revelation became distorted and then forgotten by much of the Human family. However, the ancient Sanskrit Vedic-Vaishnava Shastras (Scriptures) and Their AUTHORIZED COMMENTARIES are like a ‘time machine’ that can take us all of the way back to the Original Revelation, to MEET the Divine Revelator and Master of Mysteries, Lord Balarama HIMSELF!

Although the revelatory theology of Lord Balarama, Sri Krishna’s Second Self, is spread throughout ALL of the Vedic-Vaishnava Scriptures, in the Gaudiya Vaishnava Tradition of Sri Chaitanya Mahaprabhu, the traditional ancient Brahma Lineage Theology of Lord Balarama is especially preserved and elaborated-on in the context of describing the attributes, activities and theology of Sri Nityanananda-Balarama, Who is considered to be Lord Balarama’s Avatara in the Divine Lila of Sri Sri Gaura-Nitai.

Thus to understand Lord Balarama from the Gaudiya-related perspective of the Brahma Sampradaya (Lineage) of Vaishnavism, which is historically and theologically related to the Afro-Helleno-Semitic Judeo-cCatholic Tradition of the ancient Mediterranean, one should carefully study the Vaishnava Scriptural Translations and Traditional Gaudiya Vaishnava Commentaries of the Modern Era Gaudiya Vaishnava Master, Srila Prabhupada. END_OF_DOCUMENT_TOKEN_TO_BE_REPLACED

The Visit of the Queen of Sheba to King Solomon, Edward John Poynter 1884-1890

Pope and Rabin are considered two of the most important scholars to specialize in studying the “Song of Songs”.  I DO NOT AGREE with either of their interpretations, but both of them provide a strong rational for my Thesis, because they discuss some of the SAME issues that are important in my work.  Thus their research legitimatizes my own by raising the same or closely related questions.   In this article I first introduced the subject of the Divine and Earthly Gokula / Goloka.  Then I pointed-out that the scholar of Protestant Christianity, Pope and the Jewish Scholar Rabin raised some extremely important questions.  Then I gave some links.  Finally I showed how my work ‘Contribution’ identified the specific Bridal Mysticism SOURCE in the ancient Mediterranean, namely the Bucolic Paradise Island of Rhodes. The BOUKOLION was the Place where the Bridal Mysticism Rites of the HieroGamos or Monogamos Sacred Wedding took place.  The Divine Lovers of the Song of Songs are called the (plural) DODANIM and elsewhere in the Bible we  see RODANIM the plural for of RHODES.  The Hebrew Letters Daleth and Rosh are almost identical, thus it is clear that the DODANIM of the “Song” were the RODANIM Divine Lovers of Rhodes!

What I contributed was the HISTORICAL and THEOLOGICAL IDENTITY of the SPECIFIC and ORIGINAL Mediterranean REGIONAL ‘HIEROGAMOS” Rhoda-Kouros / Radha-Krishna Bridal Mysticism Tradition that all of the other Mediterranean REGIONAL TRADITIONS including the BIBLICAL TRADITION were derived from. As a Vaishnava disciple of Srila Prabhupada’s, I naturally offered the fruits of my labors TO THE VAISHNAVA COMMUNITY. Perhapes if I had NOT made this sacrifice of my life’s work, my life would have been entirely different, and I would not ‘be here’ today, still struggling to get even a few of my Godbrothers and Godsisters to accept my devotional service offerings and ‘take my work seriously’.

This major discovery of the Rhoda-Kouros and BALAdeva Bridal Mysticism Core of the Judeo-Catholic Tradition could have been used by the leaders of the Hare Krishna Movement to unify all of Humanity in the NON-SECTARIAN HARI NAMA SANKIRTAN Mission of Sri Sri Gaura-Nitai! Instead those leaders chose to ally ISKCON and the Movement to the anti-Judeo-Catholic and anti-Semitic Aryanist and Occult Neo-Gnostic ‘New Age Movement’, and their hyper-sectarian version of exclusivistic Gaudiya Vaishnavism. Thus they could only reject and suppress any and all of my research ‘discoveries’, because they were entirely invested in their own profoundly prejudicial and exclusivistically sectarian World-view. The anti-Jewish and Anti-Christian Vaishnava Leaders did not want anyone to know that the ORIGINAL REGIONAL MEDITERRANEAN Bhakti Tradition was the Cultus of Radha-Krishna / Rhoda-Kouros and Their Supreme Hierophant, Yahu-BAL (Dionysos) on Their BUCOLIC / GOKULA Cow-Paradise Nymphia Lotus-ISLE of Rhodes.

There are countless historical and theological connections between the Bucolic Boukolion (GO-KULA) Hiero-Gamos Bhakti Tradition of Rhoda and Kouros of Rhodes and the Bucolic GOKULA / GO-LOKA Tradition of Radha-Krishna worship in the Vrndavan-Mathura Region of India. These connections evidence that the CORE of both of the Judeo-Catholic and the Eastern Bhakti Divine Love Traditions has ALWAYS BEEN the worship of Radha-Krishna and Balarama as Their Supreme Master of Mysteries and the Spiritual Master and Savior of ALL WORLDS. END_OF_DOCUMENT_TOKEN_TO_BE_REPLACED

HERU-AUSU-ATUM the Original Supreme Godhead of the Primal Rhodes-related Heliopolitan Egyptian Bhakti Divine Love Tradition is HARI, God Who IS Love, the Lord of the HRID / HEART.

The Circle Hieroglyph reads ‘R (HR) or ‘L and used to be rendered by modern linguists as HOR, but more recently has been rendered as HERU.

The Second Person of the Primal Deity HERU was AUSU, here depicted as the Uraeus Cobra or Ourobolos Serpent of Infinity that is holding-up Heru. Ananta Sesha Naga as Ausu-Uraeus is draped with His Ankh Cross, which is His Symbol as the Cosmic Purusha PER-AUSU. The cCatholic Apostolic Coptic Egyptian Rite of Saint Mark of Alexandria Egypt retained this same ancient ANKH CROSS OF AUSU / OSIRIS AS ITS SYMBOL OF JESUS CHRIST, the Self-Sacrificed Cosmic Purusha (Egyptian PER-AUSU, Greek POLIEUS).

HERU-AUSU’s Omnipresent Third Person, Their Holy Spirit ATUM (the Indic Tradition PARAM-ATMAN), is depicted as the CORONA / KARANA-MALA Garland of RAY-HANDS (Sanskrit KARA) that extend from HERU-AUSU and Hold His Ankh Crosses. These Ray-Hands also do the creating, maintaining and dismantling work of all Temporary (composite, material) Worlds. Even today countless Vaishnava and Pure Land Buddhist Icons of HARI still depict Him
as surrounded by just such a ‘Garland of Ray-Hands’.

As the KR root Name CREATOR, Hari-Vasu-Atman is called KRITA Creator, KRITA-KRITA Creator of Creators, and KARTRI Creator. He is God / Huta and the Lord of Lords, Guard of Guardians and Ward of Wardens, Varda-vardana. He is the Raja-raja King of kings. Compare ancient Greek REX, Roman REG and Biblical Hebrew ROSH and RAZAN. He is Vasudeva of the vasudevas the Biblical Basileos of the basileos. He is HARI of the Hari-janas / Haryana / Suragana and ELI of the Elohima.

Together the 3 Persons of the Trinity of the Transcendent HERU, the Mediating AUSU and the Immanent ATUM are the Original Supreme Personality of Godhead. They are the HERU-AUSU-ATUM of Heliopolis, the HELI-OSiris-ATOMOS of the Greeks, the HERU-WASU-ATEN of Thebes (in Egypt), the ELI-YAHU-ADON of the Biblical Semites, and the HARI-VASU -ATMAN (Krishna-Baladeva-Paramatma) of the Vaishnavas. To the Pure Land Buddhists These Same Three Persons of the HARI Trinity were the TRI KAYA of Amitabha-Amitayus-Lokeshvara.

+In the Name of the Father, the Son and Their Holy Spirit, and with the help of our Mother Mary-Miriam / Nari-Narayani, Radha / Rhoda Mystica, may our human Family again be united as ONE FAMILY UNDER GOD! + Amun Amen Amin Aum !
END_OF_DOCUMENT_TOKEN_TO_BE_REPLACED 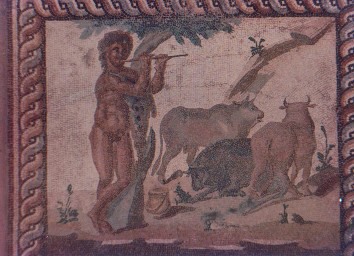 Corinthia ,south of Athens, Greece painted in the wall of a ruin this picture strongly resembles the Cow tending flute playing Lord Krishna.

HARI-VASU-ATMAN / KRISHNA-BALADEVA-PARAMATMAN is the Original Supreme Personality of Godhead.  Did you know that Lord Ananta-Baladeva, the Rig Vedic Cosmic Purusha Himself, once secretly Incarnated as the Great Physician CHARAKA to deliver ALL HUMANITY from birth, death disease and old age?

In the Mediterranean Region Charaka  was prophetically worshiped as IASAS / YASHAS (YAHU-SHUA / JESUS) Asclepios of the Greeks, Aesculapius of the Romans, Osiris-Serapis of the Egyptians and Eshmun in Phonecia. He was the most well-known, loved and worshiped God of the entire Region for thousands of years.  Within 100 years of the Appearance of Jesus Christ, the worship of Charaka (Serapis, Iasas etc.) became the worship of the Cosmic Purusha and Great Physician Jesus Christ, whose Rig Vedic Self-Sacrifice “…takes away the sins of the World (Cosmos)”.

In the Mediterranean Region the Original Supreme Personality of Godhead, worshiped by the greatest ascetic saints, mystics, prophets, philosophers, scientists, artists, heroes and kings, was HERU-WASU-ATEN / ELI-YAHU-ADON / HELI-OS-ATOMOS (HARI-VASU-ATMAN) and on His Sacred BUCOLIC (GOKULA) LOTUS (NYMPHIA) ISLAND of RHODA, HE was worshiped exclusively as the Meghistos Kouros or Greatest Youth, KRISHNA! He was considered the ORIGIN of ALL of the (Purusha male, giver) Greek ‘Gods’ and His feminine receiver Prakriti Shekinah / Shakti RHODA (RADHA) was considered the ORIGIN of all of the Greek ‘Goddesses’!

END_OF_DOCUMENT_TOKEN_TO_BE_REPLACED 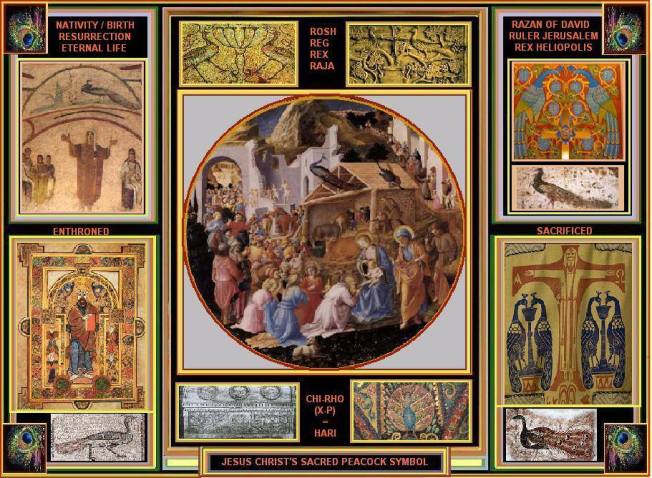 In the center picture Baby Jesus is on His Mother Mary’s Lap. Mary-Mariam is Nari-Narayani. In the other pictures, Jesus as the Rig Vedic Cosmic Purusha and Sacred King is Sacrificed for the Sins of the World, on the Yupa Cross / Stanu Stambha of All Creation, and He is enthroned as the Triumphant Cosmic Lord. In these and the other pictures Jesus is symbolized by His Sacred Peacock or Fire-Bird / Phoenix

The Peacock, Phoenix and Golden Pheasant, Cock and related birds were interchangeble as belonging to one of the important categories of the Sacred Birds of HERU, HELI, ELI, ALI or HARI (etc.). Specifically the Peacock common to India was also the Emblem of the Jewish Deity ELI and His Royal House of King David and Solomon of Jerusalem. Thus the Peacock also represented Jerusalem, Judah, Israel, Judaism and Jesus Christ as the Jewish Messiah.

The Peacock, which was often interchangeble with the Phoenix, was also an important symbol of Helios and His Sacred Cities of Heliopolis, the original City of Heliopolis (AUM/N AMUN, AMEN, ON) in Egypt, and the later City of Heliopolis Baalbek in Lebanon.  END_OF_DOCUMENT_TOKEN_TO_BE_REPLACED 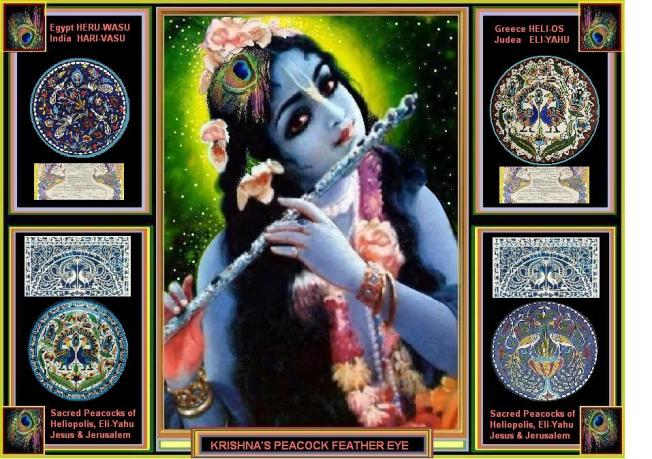 Please study the Sacred Peacock and its closest relatives, the Phoenix, Quetzal, Golden Pheasant, Mediterranean or Persian Cockerel etc., which were sacred and propagated around the World by the Devotees of the Supreme Lord.  Some of them Heralded the Dawn, and were thus widely revered for their sensitivity to the first light of the day. The Peacock and Persian or Domestic Cock (Rooster, see Wiki) were both important in Judaism, and in the Schools devoted to Asclepios Iasas (Jesus, Ananta-Charaka) the Great Physician.
The most familiar Peacock itself was imported from India by the Bible’s King Solomon (Jewish Scriptures [Christian Old Testament], Kings 10:22, 2 Chron. 9:21), and was the Symbol of the Royal Messianic Lineage of David.  Scholars have long recognized that the ancient Biblical word for Peacock comes from Tamil Nadu South India.
END_OF_DOCUMENT_TOKEN_TO_BE_REPLACED

HARI, Krishna, is the Sourse of all spiritual and material worlds. Our local Sun Planet is just one of HARI’s infinite manifestations. When our Sun is considered a Form of Hari / God, our Sun is called Surya-Narayana. If we study the 1008 Holy Names of Surya Narayana, we can understand that Surya is a Form of HARI or Narayana, Krishna-Vishnu. However this Solar-Globe Planetary Form of His is NOT His ‘Original’ or ‘Supreme’ Form. Scholars have thus been mistaken in their identification of HARI (Krishna) as part of their imagined Global Class of Supreme Solar Gods. END_OF_DOCUMENT_TOKEN_TO_BE_REPLACED