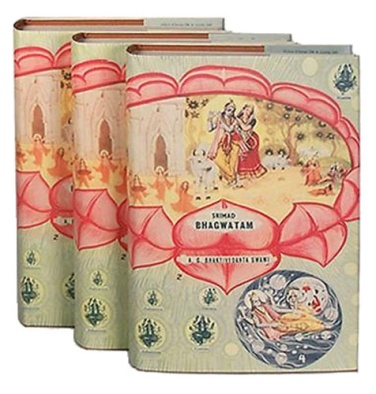 Due to the transcendental activity of Srila Prabhupada, I was blessed to have the association of Dr. Acharya Prabhakar Mishra, who was un-rivaled as a great academically honored Sanskritist and Vaishnava Acharya of the Sanskrit Bhakti Shastras. Dr. Mishra was Srila Prabhupada’s intimate friend and devoted first Disciple and Srila Prabhupada’s Sanskrit Guru. They lived together in Jhansi for over 5 years, and after Srila Prabhupada moved away from Jhansi, Dr. Mishra continued to try to help him, and supported him at various times, for years. Once, when I asked Hansadutta ‘Swami’ if Srila Prabhupada ever said anything about Dr. Mishra, he replied that Srila Prabhupada said that “He is the best”.
When I was in Sri Lanka, India and Nepal, in the association of both Hindu academic and government leaders, I personally saw for myself the profound esteem which these leaders had for Dr. Mishra as possibly the World’s greatest living Master of the Sanskrit Bhakti Shastras and a Great Saintly Vaishnava.
Why should this be of any significance to the other disciples of Srila Prabhupada? Why should we care about Dr. Mishra’s extraordinary academic credentials or his personal character, or what Dr. Mishra had to say to me about Srila Prabhupada’s Books?
We should care, because there can be NO comparison between the Sanskrit mastery of any other of Srila Prabhupada’s disciples and that of Dr. Mishra. However when I questioned him about Srila Prabhupada’s Books, Dr. Mishra immediately took the humble position of refusing to make ANY mundane criticism of them! In fact when we discussed the years that Srila Prabhupada studied Sanskrit under Dr. Mishra’s guidance, Dr. Mishra again took a most humble position, saying only that he was only helping Srila Prabhupada with some of the finer points of Sanskrit grammar, not not with the root meanings of the words.
Non-linguists often do not realize that in a language like Sanskrit, the same word root can have various meanings. It is the Tradition of Guru, Shastra and Sadhu that INSURES that the correct meanings are passed-down from generation to generation through what Srila Prabhupada rightly called the ‘disciplic succession’. Note that he used the ‘improper’ word DISCIPLIC, but that his use of this grammatically ‘incorrect’ word WAS more importantly historically and theologically accurate!
In this way, I could give HUNDREDS of examples of how Srila Prabhupada’s profound knowledge and realization of the Sanskrit and Bengali Vaishnava Bhakti Shastra, and his unique ability to translate this into Modern English OPENED UP these Shastras to the Global English reading and speaking peoples, and through the international language of English to the rest of Humanity. NO merely accurate but un-inspired Sanskritist could ever have done what Srila Prabhupada did, which was of an entirely OTHER ORDER of divinely inspired genius! To therefore make some mundane criticism of his Books, or to even insult them as being “full of warts” is certainly to miss the point of his Divinely Inspired Contribution entirely.
If ANYONE was academically qualified to criticize Srila Prabhupada’s Books from a mundane academic perspective, it would have been Dr. Mishra, who was the HEAD of the Sanskrit Department of the Bharatiya Vidya Bhavan in Mumbai, India. However, he chose NOT TO CRITICIZE THEM. I saw for myself that within the Native Indian Academic Community among Vaishnava DEVOTEES this non-critical stance of Dr. Mishra was RESPECTED because Srila Prabhupada’s Spiritual Genius, ‘Realization’ and Divine Empowerment was his supreme qualification, NOT his strict adherence to the academic grammatical rules of Sanskrit word-jugglery.
By refusing to insult his Spiritual Master over the so-called defects in his Books, Acharyaji (Dr. Mishra) honored BOTH Srila Prabhupada and himself, showing by his own humble behavior the proper way to treat someone who is both one’s SPIRITUAL SUPERIOR and DISCIPLIC TRADITION MASTER.
DISCIPLE: See root of DIKSHA in Sanskrit.
A DOCtor DISCiplines DISCiples, teaching them DOCtrine from a DOCument, and inDOCtrinating them in the DOCtrines of their “DISCIplic succession”!
Given the choice of a grammatically (etc.) perfect manuscript edited by a non-saint and a transcendentally inspired one written and edited by a true SAINT, I will chose the inspired one approved by the self-realized Saint, every time!
All glories to our spotless Spiritual Master, Srila Prabhupada, whose Divinely Inspired Books can deliver humanity from the Modern Era plague of atheistic impersonalism and voidism!