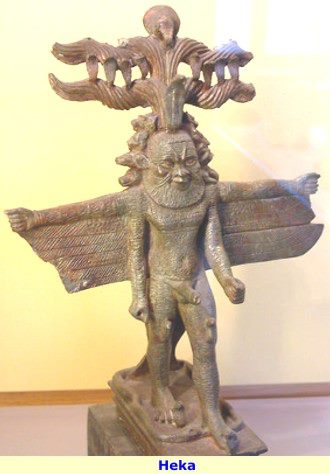 There is a V triangular tilak mark on this deity’s forehead. he has 4 arms like Vishnu, he has MN (Min – Manu) erect phallus, and is stepping forward like the Kouros statues

This is the Wrathful Leonid-Headed Cosmic Form of HELI / ELI / ALI / HERU / HARI / HARA as KALAH / TIME in His great I AM Theophany in the Bhagavad-Gita. In Egypt He was called HERU-AUSU Amun-Ra and identified with ZEUS CHRONUS (Time) and JUPITER SATURNUS (Time). Compare this Murti of Him with His relief on the top center of the Metternich Stela.

I have seen Egyptian Icons and Murtis of Amun-Ra and Bes with V / U ‘Tilak’ Marks. The phallus HIEROglyph of MN ‘MIN’ is clearly the symbol for HARI as MANU the Vedic-Vaishnava Progenitor of the Human Species. This is a Kouros-related Murti, Whose human body identifies Him as a Form of HERU-AUSU (HARI-VASU) Helios (ELI-YAHU) Meghistos Kouros KRISHNA as the Cosmic PUR-USHA / PER-AUSU / POLIEUS. Normally He holds a small peg-like object in one hand that some scholars have identified as a piece of (Holy Vaishnava and Buddhist) SHAL or Acacias wood, a symbol of resurrection and immortality. In His other, outstretched hand should be His WAS / VASUdeva Septre. In Eastern Vaishnava iconography this Septre or symbol held by Lord Baladeva / Vasudeva has been confounded with both His small hoe-like hand-plow and His cow-herding stick.

As the God of ancient WARKA / DWARKA (URUK or ERECH of the Anguiped Erechtids), HE is the NG pictorial-pun ANGA-NAGA God of the serpent-foot, angle / ankle LANGUAGE peoples. His people were NOT any shape-shifting snake-footed reptilian aliens, as imagined and invented by the nonsense New Age ‘Illuminate’ fear and hate mongerers! As Ananta Sesha Naga the Lord of the Vaishnavas, He was worshiped in the ancient lost Biblical City of IR-NACHASH of the Hebrew speaking Semites, and the NAGA-PUR (original Delhi) of the Eastern Sanskrit speaking Vaishnavas. Clearly the Hebrew city name IR-NACHASH and the Sanskrit city name NAGA-PUR are related. From ancient times Ananta Sesa Naga (Ourobolos the Serpent of Infinity) was considered an alter-Form of Hari (or Hara, Shiva) as Lion-Headed Time KALAH, the Wrathful or creative and destructive Cosmic Form of Lord Krishna in His Bhagavad-gita Self-Revelation. Thus ancient Murtis or so-called ‘cult images’ of the Supreme Lord in this Form as Time / Kalah are usually depicted with His Naga / Nachash Serpent either connected-to or as part-of His own Body / Form / Rupa.

The Universal Lord as Time often has multiple limbs, including wings, arms and hands which usually hold his septres, weapons and tools that represent His dominions, theological attributes and material powers. He has multiple heads for His many Theophanies and Incarnations of yesterday, today and tomorrow. His TODAY face is semi-Leonid, as Krishna-Vishnu Nara-Hari KALAH / TIME in His Bhagavad-Gita Great I AM Theophany.

In this Egyptian Murti He clearly has African facial features which identify Him as Amun-Ra Apademak, the Supreme Lord of KUSH / MEROE and the Lands South of Egypt. The ‘Crown’ determinative on top of His Head is a typical Compound Crown of HERU-AUSU-ATUM that combines the symbols of the specific religio-political alliance that worships this particular Form of the Lord, HERU-AUSU-ATUM. This Crown combines a large Uraeus with two levels of AMUN-KHNUM Ram Horns that are both separated and connected by eight smaller Uraeus Cobras. Ananta Sesha Naga holds up the Worlds. These are surmounted by a final single Uraeus Cobra, Who holds the Discus Chakra Hieroglyph for HERU / HARI and His Supreme Abode. Thus the entire Murti represents the Cosmology and Supra-Cosmological Metaphysics of HERU-AUSU-ATUM / ELI-YAHU-ADON / HARI-VASU-ATMAN. Below is the Material Universe VIRATA-RUPA or COSMIC FORM of PURUSHA, above Him the Vaikuntha Planets of the Spiritual Sky, and on top is Sri Hari and His Supreme Abode, all Manifest and ‘supported’ by Ananta Sesha Naga, the Seraphic Serpent of Infinity.

Behind Him is usually His hawk’s or eagle’s GARUDA tail, and He is usually trampling serpents and crocodiles and other envious and poisonous dangerous beasts and denizens of the ‘lower planets’ beneath His feet. He is the Lion-Headed wrathful TIME MAN KALAH PURUSHA that Arjuna sees, Who devours the Worlds at the end of each material universe. In late Indian Vaishnava Kalah Purusha Icons, the Cosmic Purusha is often depicted exactly in the Egyptian way, with the HIERarchical 3 Worlds of the Kalah Purusha shown as a lowest material Cosmos of Solar-Lunar and Siderial Time (Sun, Moon and Stars), the Vaikuntha Spiritual Sky above His Time-Man Kalah-Purusha Form, and the Original Supreme Abode of HARI / HERU, Goloka Vrindavan, as the ‘Highest Heaven’ above the Vaikuntha Spiritual Sky. This GOLOKA ( or Gokula) Highest Heaven is the BUKOLIC GOKURAKU Highest Heaven PARADESHA / PARADISE of the Pure Land Buddhist and Judeo-cCatholic Christian Traditions.

All of these spiritual and material worlds are manifest and sustained by Lord Baladeva, Who is the Second Self Alter-Form and the Seraphic Garuda-Ananta ‘Winged-Serpent’ Vahana and Asana etc. of HARI / HERU.

Together the Afro-Egyptian HERU-AUSU, HARI-VASU Krishna and Baladeva, are the ELI-YAHU of the Semites and the HORUS / KOUROS HELI-OS of the Greeks. In this context, one must think of the Holy Name of VASU-DEVA, the Biblical Supreme Deity Bal-YAHU, and the Afro-Egyptian Supreme Deity AUSU /WASU THEOS, as the Seed or mula mantra Name of Lord Balarama as the DEITY VASU / VISHNU of the Catur-VYUHA. Thus this Holy Name is not as ‘just’ a patronymic of Krishna and Balarama as the Earthly lila sons of Vyasadeva or Vasudeva. The 4 primary Nama-Rupa Name-Forms of Lord Baladeva’s Expansions as the Catur Vyuha are Vasu-Deva, San-Karshana, Pradumya and Aniruddha. These Catur (Quatros) 4 Vaikuntha Forms of the Lord are twice represented here, in this Egyptian Murti that I am describing, because of the symmetrical 3-divison schema of the ‘Crown’ with its identifying ‘determinatives’. The Manifestations of Lord Kalah / TIME are eternally the same, Yesterday, Today and Tomorrow. Thus HE is the Knower of the Fields of the Three Realms. He often has three eyes, as the witness or ‘Seer’ of the Three Worlds. Thus He is Helios Tri-occulos, or Zeus-Jupiter-Amun Tri-opes. He is Tri-Lok-Atma, the Self (ATMAN / ATUM / ATEN / ADON / ATOMOS / AUTOS / ONTOS) ) of the Three Lokas / Locales / Locations, Worlds of the Past, Present and Future.

The 3 divisions schema of the past, present and future in such sacred ‘cult images’ representing Eternity / AION / Kalah as Infinite ‘Time’ is usually carried-through in such ‘crowns’ that are symmetrical. Thus in this Murti, we see the CATUR VYUHA represented as 4 NAGAS on both the left and the right sides of the Vaikuntha level of the Supra-cosmic hierarchy of Godhead’s Domains / Dhamas.

Fresco Fragment from the Tomb of Nefertari

CREATOR. Sri Krishna-Visnu is KARTRI the CREATOR and KRITA-KRITA the Creator of Creators. His JUDGEMENT is the Biblical Greek KRIMA, either as good su-KARMA or ‘bad’ vi-KARMA. As VISHVA KARMAN / KHNUM, He is the Material Creator Form of Vishnu. He is Universal KARMA as Divine JUDGEMENT. He is the Egyptian KHNUM Who creates the new bodies of all things and beings on His ‘Potters’ Wheel’. This identifies Him as Vishva-KARMAN or the Universal Architect or Artisen Who fashions all things with His Ray-Hands (KARA in Sanskrit means both RAY and Hand). Please note the ACTIS or RE / RAY shafts of Light terminating in Hands that emanate from the CIRCLE / GILGUL / CYCLE / CHAKRA discus HIERO-glyphs of HERU / HARI in Egyptian Heliopolitan Icons and Murtis. Sri HARI is effulgent and His AURA, HALO or CORONA is His CROWN. He is HARI and His Feminine Shakti is HARINI, which is why one of the Holy Names of the Shekinah / Shakti of Eli-Yahu / Heli-Os is CORONIS / HARINI.

KARA is a Sanskrit PUN for both RAY and HAND, thus RAY-HANDS emanate from HARI / HERU doing the creative and redemptive work of all of the spiritual and material worlds. These are the RE/RA RAY-HANDS of PR -RA- ATUM, Indic PARAM-ATMAN, the Aten, that hold the Ankh Crosses of Life in the Iconography of the Amarna Period. As Sri Krishna HARI or SURYA-NARAYANA is KARANA-MALIN ‘Garlanded with ray-hands’, His CORONA is His CROWN.

Afro-Egyptian Apademak, Harmeti or HERU-Amun-Ra is NOT a ‘demon’ or a mere ‘solar god’! He is the Supreme Lord of the Semites and Jews as the Lion-Headed ARI-YAHU or ARI-EL. He is the Supreme God of the Persians as Zervan. He is the Lord of the great Greek and Roman Heliopolitan Monotheists. As Kalah-Bairava Time, He is the Wrathful Leonid Three-Eyed Lord of the Sattvic Shaivites and the Pure Land Buddhists. Thus it is obvious that the peoples of Africa, Europe and Asia once all worshiped Sri KRISHNA’s central Theophany or Self-Revelation as the Great I AM of all TIME / KALAH in His Bhagavad-gita AS IT IS and AS IT WAS. Please recite the Names of Lord NARA-HARI the Lion-Headed Form of Sri HARI or KRISHNA. In these Holy Names you will find the Names of KALAH and SHIVA! Krishna is also HAREYAH, SURYA, SUREH, SURIH, HAREH, HARIH etc. The Supreme Lord Adi Purusha of Pure Land Buddhism is HARIH or HRIH. The Hebrew Supreme Godhead Name ARI-YAHU / ARYEH is this same compound Holy Name. As a variation of the Jewish Hebrew Holy Name ELO-AH / ELI-YAHU (Egyptian HERU-AUSU [HOR-US], Greek HELI-OS, Roman SOLE-US, Sanskrit HARI-VASU etc.), occurs in Arabic as ALLAH.

Please see my 40+ years of other writings on the primal worship of HARI and related subjects, for additional evidence regarding the religious unity of humanity in the ancient World.