Sacred Basil / Tulasi was given to Jesus Christ on His Cross. It was dipped in HalaHala, the Sins of the Universe! When He had taken it, He said “It is Finished” and He ‘became sin for us’. Then a Martial Roman Soldier pierced His Side with the Vel of Skanda (Mars) that destroys sin (!) and Jesus accepted the Vel just as Krishna had in a previous Lila. Thus He descended to the Dead. Some Traditions say Sacred Basil / Tulasi sprang-up where His Blood dropped on the ground. Other Traditions say that Sacred Basil sprang-up from Mary’s Tears. Still others relate that Holy Basil grew directly out of Jesus Christ’s Cross. TULAsi’s Name is from the same root as Mary’s Name, Mother Most TOLERANT, who ALONE can forgive the Murder of Her Son, or a Priest! TULAsi ALONE can forgive the Murder of a Brahmin Priest! I once had 5 volumes worth of research on the World’s Sacred Basil Traditions. So, according to Apostolic cCatholic Tradition, the cCatholic Jesus Christ IS Vishnu Tattva, not just an empowered jiva soul! So many heretical Traditions have developed, but the Apostles proclaimed that THEIR JESUS CHRIST was and IS GOD! 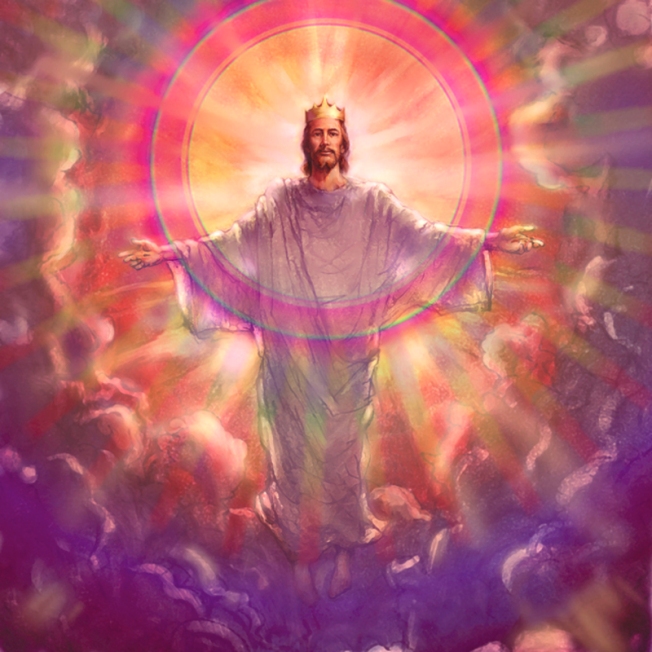 WHAT HAS JESUS CHRIST DONE FOR US?

Jesus is the PERSON of Sacrifice. He is the Cosmic Purusha called YAGNA PURUSHA. Greek HAGNOS is cognate with YAGNA. It directly means SACRIFICE and by association it means HOLY. The Cosmic Purusha “takes away the sins of the World”. First, to understand the theology you have have the foundation of the primal revelation of Purusha Sukta. In Jewish Kabbalistic Mysticism this is the revelation of the COSMIC BODY of God as Adam Kadmon or the Universal Form. It is His Universal Body in which we ‘live and move and have our being’, and which was and is sacrificed for our ‘material’ existence ultimate return to Godhead. The feminine (Receiver) Soul-Selves, or ‘Sparks of the Shekinah’ (Shakti) that have ‘fallen’ into their present perceptual and affective separation from Godhead (which is a separation of relationship NOT a separation of identity) are rescued by their Lover, the Lord, Who has not abandoned them in their ‘fallen’ wandering in the Saha Worlds of Birth, Death, Disease and Old Age. The ancients had a much more intimate relationship with food, and observed that we ‘are what we eat’. All of the Theophagos God-Eating Mystery Religions of the ancients were thus Purusha-Sukta Sacrifice based. Depending on the ‘mode’ of material nature people were in, they practiced Sattvic non-bloody vegetarian offerings, like the Nazarites the Theraputae and the Essenes. These might be

Skanda/Murugan with his Spear and Peacock

called Praise and Thanks Offerings in the Biblical Tradition. Such non-bloody offerings were like those of the Heliopolitan Ascetics, the Orphics, Pythagoreans, Platonists, Asclepiadae, the Vaishnavas, Pure Land Buddhists, Sattvic Theistic Shaivites and other ancient Ascetical Groups. Such Sattvic Theistic Groups worshiped the COSMIC Purusha, Who they believed could and DID take ‘material’ Form, to rescue His Beloved. They believed in and experienced the reality of a metaphysical realm. They were mystics, philosophers, mathematicians and theologians whose ‘VEDIC’ (Biblical YEDA, Greek OIDA) vision of the Cosmic Purusha saw Him embodied in His Sacramental Social Order of Daiva Varnashram Dharma. (NOT A RACE-BASED SYSTEM!) Peoples in the Material Mode of Goodness worshiped the simultaneously Incarnate and Omnipresent Personal and Transcendent Godhead of Hari-Vasu-Atman.Peoples in the material modes of Passion and Ignorance did not understand and worshiped with bloody animal (Passion) and human (Ignorance) Sacrifices. If you EAT, you sacrifice. Life feeds on life, and ‘you are what you eat’. If you do not yet ‘get this’ you have not yet faced your own reality. Your body is made-up of the ‘creatures’ that have been sacrificed to it, with it, by it and for it. By accepting a ‘material’ body, we become complicit in the sacrifice of other being’s bodies. Sacrifice is inescapable in this world. So for the Sattvic Devotees of the Lord, He Alone can forgive us, for all of the sins that we have become complicit in, by ‘falling’ here into matter and accepting a material body. Thus the Tradition of the Purusha Sukta acknowledges that GOD HIMSELF ultimately takes responsibility for the existence and predicament of the ‘fallen’ jiva souls, offers Himself for the COSMIC forgiveness of all their repented sins. If you do not ‘see’ (realize) your own suffering in Jesus Christ’s Passion, then you do not understand Who He Is!

In the Vaishnava Tradition, there is a cosmic battle between the followers of Krishna and Shiva, in which Krishna ACCEPTS WOUNDING BY THE VEL OF SKANDA. In various ‘Hindu’ Traditions, the Sri Vatsa Mark or Scar TIGMA TIKA or STIGMATA on KRISHNA or VISHNU’s Chest is due to His Receipt of Skanda’s Lance / Vel. Skanda IS MARS. The Vel / Lance of Skanda DESTROYS SIN in Shaivism and Marugan Worship. In Krisna-Vishnu-Shiva’s Incarnations They often accept wounding for their Devotees! Thus Kurma’s Back is scarred from the twisting of the Mandara Mountain. Vishnu bears the footprint of His Devotee’s kick. Krisna’s foot was pierced by the arrow-tip of the metal ball that slew the Yadus. Krishna’s Chest is marked by the Vel of Skanda, and Jesus Christ’s Wounds are all associated with His Previous ‘Lilas’ of World-Salvation. Thus the Lance of the Roman Soldier, which was consecrated to MARS / Marugan / Skanda, was the Vel of Skanda that destroys sin! ‘When’ Siva drank the Ocean of Poison (Hala Hala VINAGER) that was the collective sins of the Universe, He did not swallow it, but held it in His Throat. A few drops escaped him becoming all envious poisonous beings.

On the YUPA CROSS, Jesus took these last drops, which were offered on some Tulasi Leaves, AND HE SWALLOWED THEM. Thus He said “IT IS FINISHED”, and having consumed the sins of the entire Cosmic Manifestation, He became ‘Papa Purusha’ or the

repository of all of the MORTAL and Venial sins of the COSMOS, and accepting the Vel of Skanda, allowed Himself to be slain for the MORTAL SINS OF THE UNIVERSE. Because unrepented MORTAL SIN SEPARATES US FROM GODHEAD, the voluntary Self-Sacrifice of Jesus Christ / God Himself is the only karmic remedy for our mortal sinfulness. As long as we are eating and taking-up space, air and water and sustaining our lives on the lives of others, we cannot escape the FACT that we are killing others and living in these bodies at others’ expence. But, since we are ALL living within the Vishva Rupa Cosmic Body of the Adi Purusha, Adam Kadmon or the Vedic Prajapati Purusha, (Greek Polieus, Egyptian PER-AUSU), then if HE FORGIVES US, we are forgiven. If He liberates us, we are really free of our karmic burden WHICH would otherwise ‘separate us from God in Eternity’. In cCatholic Apostolic Revelation, the Sacrifice of Christ is not about ending the World immediately by instantly resolving all of Universal Karma at the Cross, because the Sacrifice of the Cross occurred at the beginning of Material Time and continues until the End of a Material Universe. Looking ahead, the ‘work of our salvation’ has already been completed BY GOD IN CHRIST. Thus the Sattvic Sacrifices of the Adi Purusha are acknowledgements as Praise and Thanks Offerings that commemorate His once-and-all-sufficient Self Sacrifice for the salvation of All Beings. Still while we are living WITHIN TIME, we must enjoy and/or suffer according to ‘our karma’. What Jesus has ‘Done For Us’ is to garuntee our ultimate MOKSHA manu-MISSION liberation, our ability to get free of the cycle of samsara, and to go back to Home, Back to Godhead! All Glories to Lord Baladeva as Jesus Christ, Yagna Purusha Yupa Dhvaja, the Lord Who Is Our Once-and -All-Sufficient Redeemer! He Alone “Takes away the sins of the World” “Happy are we who are called to His Supper” !