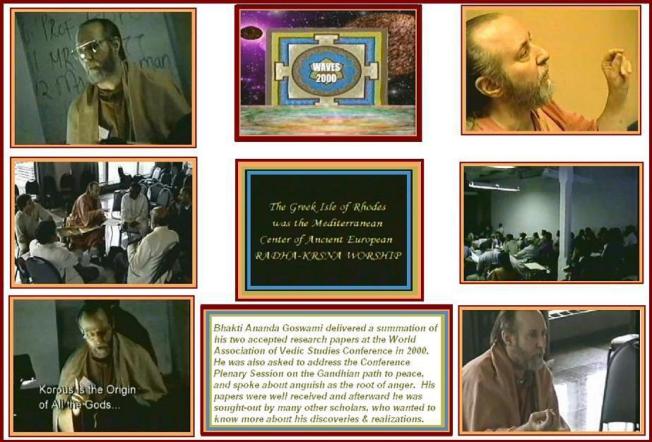 With his Father’s computer help, Bhakti Ananda Goswami is beginning to put together a series of thematic Albums to present his research and realizations, and to document his lifetime of devotional service activities and achievements  Since some people are still trying to discredit his scholarship and thus suppress the diffusion of this important information, it is necessary for him to provide such documentation and references regarding his decades of arduous and extraordinary interdisciplinary research work. After assisting Bhakti Ananda Goswami with his 2000 West Coast USA “Pharaohs of the Sun” Museum Exhibit related Lecture Tour, Vrindavan Brannon Parker again met-up with Bhakti Ananda Goswami at the 2000 World Association of Vedic Studies WAVES Conference, which was held at the Steven’s Institute of Technology in Hoboken New Jersey, USA. Vrin was there to deliver his own WAVES-accepted research Paper, on two subjects related-to Bhakti Ananda Goswami’s 1983 Master’s Thesis. Bhakti Ananda Goswami’s two 1983 Master’s Thesis related research Papers were personally accepted for Goswami’s WAVES Conference Presentation by the WAVES Founder and President, Prof. Bhudev Sharma.
Bhakti Ananda Goswami’s 1983 Goddard Graduate School Master’s Thesis was a summary of his then more than 20 years of research into the historical and theological connections between Radha-Krishna and Balarama centric Vaishnavism and the ancient Divine Love Tradition of Helios Kouros, Rhoda (Kore) and Bal (Yahu) on Their Mediterranean Lotus-Isle of Rhoda-Nymphia-Asteria (Rose-Lotus-Star), Radha-Padme-Tara. After Goswami summarized his Thesis regarding the Primal Monotheism of Rhoda (Kore) and Kouros Helios (Radha and Krishna) on Their giant ‘Red’ (pink) Lotus Isle of Rhodes, he described the persistence of this Bridal Mysticism Tradition at the heart of thousands of years of Afro-Egyptian, Semitic, Orphic, Pythagorean and Platonism-related Heliopolitan Monotheism.Bhakti Ananda Goswami then explained how from Age to Age Heliopolitan Asyla Federations or Leagues of Polieus / Purusha worshiping Temple Pur / Pol / Per City-States formed around the ancient World. The Sacred Cities of the HERU-Incarnate Pharaonic Egyptian Nome Alliances were all called PER in Egyptian and POL in Greek.
The Cities of these same Alliances in Semitic Areas were called YIR, and in India they were called PUR. Historically and theologically ALL places of Sri Krishna’s pastimes EXCEPT His Bucolic Supreme Abode of Vrindavan were called PUR. In His Pur Cities, Krishna-Vishnu was worshiped with awe and reverence as HARI VASU-DEVA of the Vasudevas, the Mediterranean’s HELIOS BASILEOS of the Basileos. Thus He was also the Heliopolitan Egyptians’ HERU AUSU-Theos (Osiris), and the Theban Egyptians’ HERU WASU-Dios. VASU-Deva was the Supreme God Wassu of the Hurrian Capital City of Mitanni.In Hebrew the Holy Names YAHU and YESHI (see the compound Holy Names Yeshi-Yahu ‘Jessiah’ and Yishma-EL ‘Ishmael’) are the same Name as the Vaishnava VASU, which is from the same root as (VISHNU) VISH / USH, AS, AH and YA, meaning to BE, EXIST, DWELL, Who IS, Who WAS and the masculine Greek OusiOS, -OS.
The VAS root as EUS also means Good, Benevolent. This is the BEING Name of God-Who-IS-GOOD.In Egypt HERU-AUSU was HELI-OS and AUSAR was Osiris. The Jews identified their ELI with HERU and their YAHU with AUSU (WASU at Thebes). Thus the Jews’ compounded their Deity Names as ELI-ASAR and AZAR-YAHU. Of course this means that the Babylonians’ Marduk ASARU, the Assyrian’s ASSHUR and the Persians’ AHURA Mazda were all the same Supreme Father God, the Vedic Vishnu as ASHURA (HERU-AUSU) the Benevolent Good God and Supreme ‘Soul of the Universe’.Thus in 1983, Bhakti Ananda Goswami’s 20+ years of Master’s Thesis research confirmed the speculations of earlier scholars who questioned if there was some kind of significant interaction of Aryan and Semitic religio-cultural influences before the rise of the great Bronze Age kingly states.

The problem that confused the previous scholars was their ‘White Aryan’ racialist interpretation of the term ‘Arya’. As long as ‘Arya’ meant a white master RACE to them, it was impossible for them to understand the truth.Beginning in the 1960s, one of Bhakti Ananda Goswami’s main contentions was that the Vedic term ARYA was a HARI and/or HARA referent religio-cultural form of identification and NOT a racial one designating the Aryas as a “White [Arya] Race”. Thus he could understand that the Hurrians or any other people could be ARYAS, worshiping the Supreme God of the Indo-Iranians, without being of a so-called ‘Aryan Race’ or speaking a so-called ‘Aryan Language’. 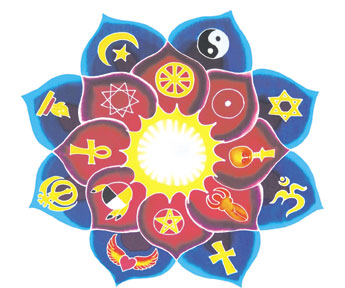 In fact, when Goswami compared litanies of Afro-Egyptian, Indo-European and Semitic Deity Names, it was obvious that these were litanies of the Holy Names of the same Supreme Personality of Godhead.


Bhakti Ananda Goswami’s 1983 Master’s Thesis related WAVES 2000 Presentation was very well attended with a full lecture hall and people standing along the walls. Of the many scholars who attended it, not a single one challenged Bhakti Ananda Goswami’s evidence or his conclusions. Instead he received enthusiastic applause for his Presentation, and many scholars sought him out after his Presentation to discuss his research with him.


A group of scholars from India stayed-on in the USA just to have the chance to visit with him, discussing Bhakti Ananda Goswami’s in-depth research into the ancient Vaishnava connections with the Shaivite, Pure Land Buddhist, Persian Zurvanite, and the Judeo-cCatholic Afro-Heleno-Semitic Bhakti Traditions. The group even hired a professional videographer to film hours of their question-and-answer sessions with him. After this post-Conference week of group discussions with WAVES 2000 Scholars, Bhakti Ananda Goswami began an East Coast Lecture Tour.

This, and other planned Albums, will document a few of the travels and accomplishments of Bhakti Ananda Goswami / David M. Sherman.

“This episode of ‘Vedic Empire Presents’ takes the viewer into the Scholarly world of the annual WAVES conferences. WAVES the World Association of Vedic Studies, a multidisciplinary academic society founded in 1996 in Atlanta, GA USA has grown into an International Organization with regular Conferences held in various locations around the world.

In the year 2000 a WAVES conference took place in Hoboken, NJ at Stevens Technical Institute. Attended by Scholars, Authors, Academics, Community Leaders and other luminaries, it was a historic gathering. Attendees participated from around the World and many groundbreaking studies were shared and appreciated by all involved.”

“Among others, this documentary features a rare public presentation by Bhakti Ananda Goswami aka David Sherman, the world’s leading scholar and expert on the history of religion and the cross-cultural expressions and practices of the ancient World’s faith traditions. ”

In his well-received dynamic presentation he highlighted the undeniable links between the Vedic Vaishnava Harih and Radha-Krishna Tradition and the ancient Mediterranean World’s Helios and Rhoda-Kouros Worship Tradtions.