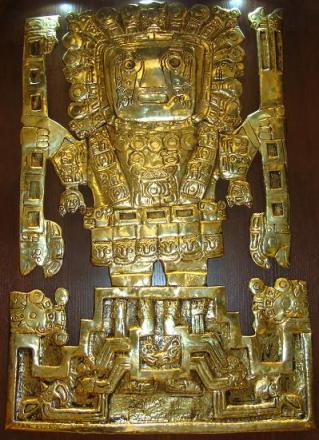 VIRACOCHA is the Supreme God of all of the Andean Tribes and has religious cognates throughout the tribes of the Western Hemisphere. His worship had an ancient center near lake Titicacha and Machu Picchu. The Great Flood Story was prominent among the Andean Tribes and there are many connections between the worship of Vishnu in the Vedic-Vaishnava Flood Story of MANU and the Cultus of Viracocha in the Region of this Lake and Machu Picchu. Macha Puchara ‘Matsya’s Fin’ is the Sacred Peak in the Himalayas that is shaped like Machu Picchu. The totem-pole style of the multi-headed Form of Vishnu / Avalokiteshvara, especially the Bhagavad-gita related Kalah Form is quite obviously the totem-pole style multi-headed Form of Viracocha. Vairocana is a sectarian by-Name of the Adi Purusha in Mahayana Buddhism. There may be a connection between the Names themselves, but the Deity in both cases is obviously the Adi Purusha, the Cosmic and Supra-Cosmic Lord of All.  Viracocha in His totem pole style multi-headed Form. Compare this to the Mahayana Buddhist totem pole style multi-headed Forms of Avalokiteshvara/Vishnu. Some of the Forms of Viracocha the Andean Supreme God are recognizably Forms of Vishnu.

The fanged Leonid Face of Viracocha in one of His totem pole style Forms.

Viracocha was the Supreme God of all of the Pre-Inca Andean Tribes. The Incas, who also worshiped Viracocha, were considered brutal lords by the Pre-Incan Tribes. Their Incan worship of Viracocha was really secondary to their human sacrifice cultus of Inti Sun Worship, but the Incas did retain the idea that Viracocha was the father of Inti and all beings / creation. For their mundanity and brutality, the Incan human sacrifice and animal blood sacrifice traditions would have to be classed as religion in the modes of passion and ignorance. Vaishnavism and Pure Land Buddhism stress that the Supreme Lord only accepts sacrifices from humans that are offered in the sattvic or non-violent Mode of Goodness. Thus Sattvic Vaishnavas and Pure Land Buddhists do not perform any blood sacrifices or eat the flesh of any animals.

Virococha is also the God of all beginnings and portals, exists and entry-ways. Thus His Form is found throughout the region on Gates and the Temple portals and the entries to the Sanctuaries, which are His Giant Mouths that the Priests enter, being consumed by Him. This is a direct reference to His Wrathful Form as Time / Kalah in His Bhagavad-gita, when Arjuna sees Him as Time Devouring the Worlds!