So far I have stated that the Buddhist iconography of both the
Northern or Mahayana (with the Pure Land devotional tradition at its
core) and Southern or Hinayana (Theravadin or atheistic) schools is
the same. I have described seeing examples of this canon of sacred
forms from the earliest known Buddhist sites from Japan and Angkor Wat
Cambodia to Nepal and Sri Lanka, the proud `capital’ of Buddhist
atheism. Furthermore I have stated that this symbology and
iconography is easily recognizable as deriving from Krishna-centric
Vaishnavism, as exemplified by the devotional cultus of Sri Krishna
(Hari = HRIH Dharma Kaya Amitabha) and Sri Baladeva (Sankarshan Vishnu
= Sambhogya Kaya Amitayus-Lokeshvara) at Their ancient Indian Center
of devotion in Vrindavana-Mathura. I have explained that authentic
(pure Pure Land) early Buddhism was a form of Krishna-centric
Vaishnavism, but that atheistic Buddhism has misrepresented itself to
the world as the original form of Buddhism. Because the Theravadin
Buddhist elite of Sri Lanka proudly proclaim Sri Lanka to be the
historical capital of Buddhist atheism (Theravada), and this claim is
not disputed in the Theravadin Buddhist world, I have very carefully
sought evidence to support this claim. Since the Sri Lankan
Theravadins themselves assert that their Buddhism first came to Sri
Lanka as part of the Indian Emperor Ashoka the Great’s Buddhist
missionary effort, logically one should be able to understand the
`original’ Buddhism of the island from gaining an accurate
understanding of the Buddhism promoted by Ashoka’s missionaries. So I
carefully investigated the Buddhism of Emperor Ashoka, and here is
what I found. 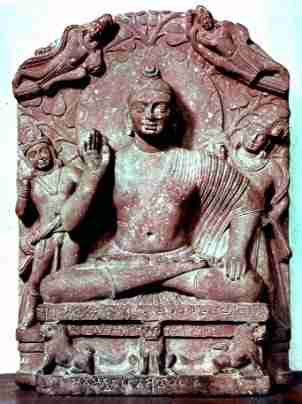 (Remember that the earliest archeological evidence of
Buddhist Sacred Art throughout both the Northern and Southern ranges
of Buddhism has striking commonalities with Vrindavana-Mathuran
Krishna-centric Vaishnava iconography and symbolism.)
The Central Significance of Vrindavana-Mathura in Mahayana Buddhist
History

In Joseph Campbell’s Masks of God (4 volumes, Viking) and other
comparative and exclusive studies of Buddhism, it has been readily
acknowledged that Ashoka’s own Buddhist Master had a great monastery
in Mathura. Campbell cites a reference to this claiming that Ashoka’s
Master’s (Third Century BCE) monastery in Mathura had 10,000 monks
residing in it!

This area, popularly known as Brij Bhoomi, is a major pilgrimage place
of Hindus. Shree Krishna, the popular incarnation of Vishnu, is
believed to have been born in Mathura (Muttra) and the area is closely
linked with many episodes in his early life. Nearby is Vrindavan
(Vrindaban) where Krishna `sported’ with his gopis (milkmaids).

Mathura is an ancient cultural and religious center. The Buddhist
monasteries that were built here received considerable patronage from
Ashoka, and Mathura was mentioned by Ptolemy and by the Chinese
visitors Fahsien (who visited India from 401 to 410 AD) and Xuan Zhang
(634-762 AD) in their works… 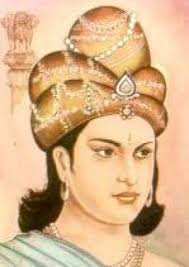 Ashoka (Third Century BCE) was the last of the great Mauryan Dynasty
Emperors. The Mauryas were Vaishnavas, but Ashoka, after a
particularly horrific military campaign (against Kalinga) that
consolidated his rule over much of India, is said to have `converted’
to the non-violent discipline of `Buddhism’, becoming its greatest
royal advocate. Filled with missionary zeal, he energetically
patronized this `Buddhism’, building up its holy places and supporting
its monasteries and sending missionaries with its messages of
benevolence as far as the Mediterranean! It is one of these missions
(actually related to his personal family) that supposedly reached the
Island of Sri Lanka, establishing Buddhism there. He participated in
Buddhist councils, and while he protected Vaishnavism and some other
traditional Indian religions, he also suppressed heterodox groups. In
fact, “There is also evidence from the Edicts [of Ashoka] that he
intervened to expel dissident elements from the Buddhist Order…”
(Page 100, The Oxford Dictionary of World Religions, 1997, Oxford
University Press.)

It is not contested that Ashoka continued his protection and support of Vaishnavism, or that his own Buddhist
Master’s ashram was in Mathura, the royal religio-cultural capital of
Krishna-centric Vaishnavism, so what was the so-called `Buddhism’ that
in his liberality he found so intolerable that he actually suppressed
and expelled as “dissident”? Well, what is the heterodox `Buddhism’
that arrived in Sri Lanka at that time? What `Buddhism’ has
continuously denied the clearly Mahayana-related evidence of Pure Land
Ashokan Buddhism, which from all of the archeological hard evidence
arrived in Sri Lanka during the same era, and was spread throughout
the entire region (and beyond) by Ashoka’s missionaries?

Considered heterodox, it appears that Theravadin Buddhism was expelled
from India by the Emperor Ashoka!

A Collection of Buddhist Sculptures

Is it conceivable that everywhere else Ashoka’s Missionaries were
spreading Vaishnava-Bhakti-related Pure Land Mahayana Buddhism, but
that in Sri Lanka alone they were teaching Theravada / Hinayana
atheism? Is it conceivable that atheistic Theravadin Buddhism would
be blissfully co-existing with Krishna-centric Vaishnavism in Mathura,
the very world intellectual epicenter of Krishna-centrism? Would the
`Vatican City’ of Krishna-Vaishnavism tolerate the presence of
thousands of Theravadin Buddhist Atheists who believed that Krishna
was a demon? Nearby Vrindavana, as the more esoteric `Bridal
Mysticism’ Center of pastoral (Bucolic / Gokula / Gokura)
Krishna-Vaishnavism was never the university (monastery) intellectual
or royal seat of Krishna Vaishnavism. As the sanctum sanctorum of Sri
Sri Radha-Krishna and Baladeva and the Gopis’ Bridal Mysticism Rasa
Lila `Pastimes’, Vrindavana’s sacred pastoral character was always
religiously safeguarded from certain kinds of development. However,
as the center of awesome and reverential royal / raja Krishna-worship,
nearby Mathura was the diffusional royal epicenter of Krishna-centric
Vaishnavism for countless centuries. At the time of Ashoka, it was
the intellectual and artistic capital of Krishna-centric Vaishnavism.
How could Ashoka’s own Master have had an ashram with 10,000 monks in
it in the royal capital of Sri Krishna’s worship (Sri Krishna’s own
birthplace), if he had been a Theravadin Buddhist ? The Theravadin
Buddhists of Sri Lanka teach that Krishna and Balarama are demons, and
some teach the Jain doctrine that Krishna is in a hell for his role in
the Great (Mahabharata) War!

In fact, in both of the university-like intellectual `Buddhist’
centers of Mathura and Gandhara, the Vaishnavas and Buddhists were
completely compatible as members of various lineages or orders of the
SAME RELIGION. This fact cannot be contested. No honest scholar can
deny that Gandhara and Mathura, the two greatest early Mahayana
centers of Buddhist intellectual and artistic activity and diffusion
were also Vaishnava centers of the same! This was not a sequential
phenomenon either! The Vaishnava and Buddhist presence in these
centers of Bhakti Yoga was contemporaneous. In fact, there was a
Western Bhakti Asyla Temple Federation representation in the visitors
and residents of these two great Vaishnava and Buddhist `university’
Centers of Gandhara and Mathura too! Greeks, Romans and other western
Eli-Yahu / Heli-os / Heri-Asu worshipers visited and lived in these
two Centers. (In my next installment in this series I plan to
describe a little about the Greek and specifically Rhodian connections
to the Vaishnava-Buddhist Sacred Art of these two Centers.) When it
is known that Mathura was the North Indian regional Center of Krishna
Bhakti, how is it possible that the very antithesis of
Krishna-Vaishnavism and closely related Pure Land Buddhist Bhakti,
namely atheistic Theravadin Buddhism, could have been the Buddhism
that Ashoka patronized there? When it is clear from evidence all over
the region (and beyond) that Ashoka equally protected and supported
Vaishnavism and Mahayana (Pure Land) Buddhism, and that at the time
these two great Bhakti Traditions were considered part of the SAME
RELIGION, how is it conceivable that the `Buddhism’ that he patronized
in Sri Lanka was Theravadin, the historical and doctrinal antithesis
of both Vaishnavism and Pure Land Buddhism?
The Ongoing Iconoclastic Destruction of the Evidence in Sri Lanka

It is inconceivable that Ashoka’s Mathuran Vaishnava-related Pure Land
Buddhism became Theravadin Atheism upon arrival in Sri Lanka. This is
why the Theravadin Buddhists of Sri Lanka must misrepresent the
historical evidence to support their claim. This is why they have
been (and still are) involved in the occupation and destruction of
important early Buddhist and Hindu archeological sites, and why they
have stolen, obscured and defaced, etc. so much iconographic evidence
from their own early Buddhist history. Like the Taliban and other
iconoclastic Muslim barbarians, the Sri Lankan Theravadin Buddhist
atheists must obscure or destroy the ancient Buddhist Sacred Art,
which is the constant reminder of their hostile occupation of a land
once populated by a people of faith in the Personal God of Grace, Who
has incarnated to save the world. By erasing this `Hindu-related’
Buddhist Sacred Art of the Incarnate God, the atheistic Sri Lankan
Theravadin Buddhist iconoclasts are attempting to erase the truth of
history, and in its place to assert the originality and authenticity
of their own corrupt God-less tradition. However, if we examine the
evidence (before the iconoclasts have stolen or destroyed it all and
it is too late), we will learn the truth about Ashoka-related Sri
Lankan Buddhism’s original relationship to Vaishnavism, and we will
learn that the Theravadin Buddhist’s historical claims to being the
world’s original Buddhism are, like their doctrine, full of only
“emptiness.” If the case supporting the historical claims of
atheistic Buddhism in Sri Lanka (its undisputed world-capital) is
empty, then there is no meritorious case for it anywhere.

May Buddhists everywhere recover the theistic devotional purity of
their original Pure Land tradition, and may they, in doing so,
rediscover their ancient unity with the Great Bhakti Traditions of
India and the Asyla Federations of the West.

Praying for the day when a new university will rise, like a phoenix
from the ashes of the memory of Gandhara and Mathura, to reunite the
Lord’s Bhakti Yoga devotees of the East and West,